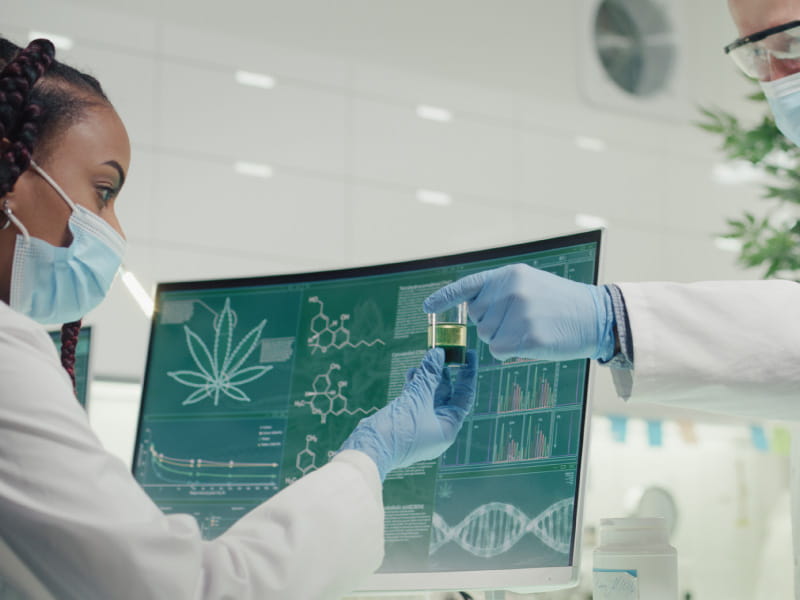 Over the past decade, the use of marijuana, both recreational and medicinal, has increased as state governments across the United States have legalized its use. But while it may be legal for adults to light up, the question of whether it’s harmful or helpful in many cases remains unanswered.

Researchers say the truth is complicated.

Although it has been studied for decades, much remains unknown about how marijuana, or cannabis, affects heart and brain health. And there are significant challenges to be overcome in order to find clear answers.

“The evidence that has emerged from animal models shows ramifications in the brain and in the heart, but the data for humans is murkier,” said Dr. Fernando Daniel Testai, a neurologist in the Department of Neurology and Rehabilitation at the University of Chicago. Testai was the lead author of a scientific statement from the American Heart Association last year that detailed what is known and not known about the effects of marijuana on brain health.

“So many factors go into the equation,” said Staci Gruber, associate professor of psychiatry at Harvard Medical School in Boston. She oversees the Marijuana Investigations for Neuroscientific Discovery (MIND) program at McLean Hospital in Belmont, Massachusetts, which studies the effects of medical marijuana on clinical and cognitive measures, as well as brain structure and function and the quality of life.

Differences in how people use marijuana, the strengths of the products they use, the active ingredients they contain, how often they use them and for how long, and age can all play a role in determining how health is affected, Gruber said. It is up to researchers to dig into each of these areas, but legal, ethical and other hurdles make this difficult.

In the United States, more than 48 million people over the age of 12 reported using marijuana in 2019, according to the Substance Abuse and Mental Health Administration. This represents about 18% of the population, compared to 11% two decades ago.

Also known as pot or weed, marijuana can be used for recreational or medicinal purposes, such as reducing nausea or relieving chronic pain in people with cancer. It can be smoked as a cigarette or in pipes or water pipes, vaporized or infused into baked goods, gummy candies or drinks. Its compounds can be extracted to make oils and concentrates, which can also be vaped or smoked. Little is known about the safety of one method over another, although there is some evidence that burning marijuana can be harmful.

Gruber said part of the confusion stems from what people mean when they use the word “marijuana.” Marijuana refers to the dried flowers, leaves, stems and seeds of the cannabis plant, which contains over 100 chemical compounds. The two most recognized are tetrahydrocannabinol – THC – responsible for the psychotropic effects of the plant, and cannabidiol – CBD – which does not produce a “high” but has been used to treat pediatric seizure disorders, anxiety, pain and inflammation.

“We often use the terms ‘marijuana’ or ‘cannabis’ to describe anything from the plant, but different compounds in the plant have different effects,” Gruber said.

When discussing health impacts, it’s also important to distinguish between recreational and medicinal use, she said. “Recreational users tend to look for high THC content in the products they use. Medical users may or may not. They generally don’t want to get high, but want to alleviate symptoms so they can do everyday things like go to the store and remember why they are there.”

Some studies suggest that chronic, heavy recreational use may impair cognitive function, particularly if such use begins during adolescence. But research shows that adult medical cannabis patients may experience some cognitive benefits. Gruber was the lead author of a 2018 study published in the journal Frontiers of Pharmacology that showed people who used medical cannabis experienced improvements in executive function over time, with no verbal or learning deficits. of memory.

There are also differences in how different types of use affect heart health.

Although high levels of recreational THC exposure can lead to increased blood pressure, Gruber said, a study last year in Israel found that people 60 and older who used THC medical marijuana for three months showed a reduction in blood pressure. A 2020 scientific statement from the AHA said observational studies have linked marijuana use to an increased risk of heart attack, atrial fibrillation and heart failure, but acknowledged that its impact on the heart and blood vessels was not well understood due to a lack of adequate research.

A study directly comparing the effects of medical marijuana use to recreational use would be helpful, Testai said. As well as a clearer definition of what chronic and heavy recreational use really means.

“Most studies measure exposure to marijuana based on self-reported use,” he said. “There is no objective data on people’s consumption.”

Another challenge is that people who use it recreationally may use other drugs or substances, such as cigarettes or other mind-altering drugs. This makes it difficult to determine which impacts come from which substances, Testai said.

How often a person uses marijuana, how much they use, and for how long matters, Gruber said. For example, people may initially experience a rapid heart rate, called tachycardia, from products containing THC. But regular use can lead to tolerance to this effect, often after a few days or weeks.

In clinical studies, researchers measure and monitor what people eat. But because the federal government still classifies marijuana as a Schedule 1 substance, meaning it’s considered to have a high potential for abuse, researchers face tight restrictions on the products they use. can give to study participants.

“Unlike alcohol, which is quite simple, cannabis is a lot of different things,” she said. She asks people who use recreational marijuana in her observational studies to submit samples of the products they use most often so they can be analyzed to better measure what’s going on in their bodies.

Age also plays an important role, Gruber said. Evidence suggests that marijuana use during key periods of brain development may impair cognition more than it would if use began in adulthood.

Testai said researchers face another hurdle: the inability to assign a control group to the placebo.

“The most basic or clearest way to do research is a randomized, placebo-controlled study,” he said. But with marijuana, “there’s no way to really mask its effects. Doing high-quality research in this area is confounded by how marijuana works, let alone ethics.”

Until there is a better solution, Gruber said, researchers “must be creative thinkers. We must try to capture observational data as closely and rigorously as possible as well as conduct clinical trials empirically. solid.”

If you have any questions or comments about this story, please email [email protected]

What are the health effects of pod-based vaping? | Life