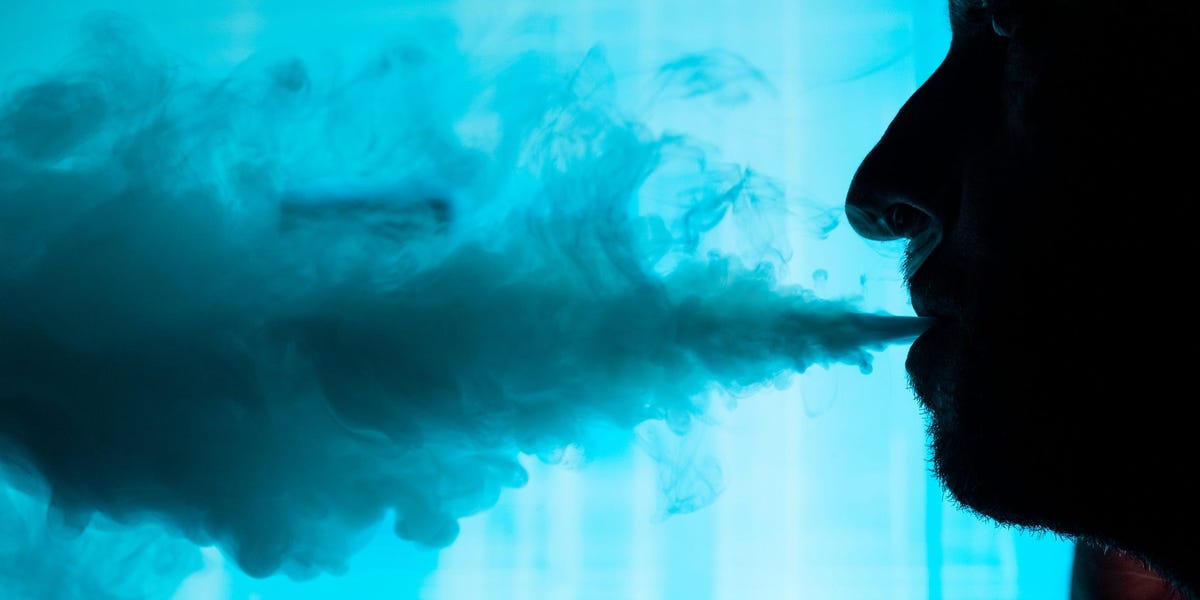 When e-cigarettes hit the market in the mid-2000s, they were touted as a safer alternative to traditional cigarettes, and even a way for smokers to quit. However, vaping still leads to serious health complications.

Here’s what you need to know about how vaping compares to smoking and the health risks associated with e-cigarettes.

Is vaping better than smoking?

Since vaping is relatively new compared to traditional cigarettes, there are fewer studies and data available to show the long-term effects of vaping and how they compare to the risks associated with smoking, such as cancer and

But we know that vaping causes inflammation that can lead to lung damage, and e-cigarettes still contain nicotine, the same addictive drug found in traditional cigarettes.

According to the National Cancer Institute, e-cigarettes are less carcinogenic or less likely to cause cancer because they contain fewer chemicals than regular cigarettes. But just because there are fewer chemicals doesn’t mean they’re less harmful.

The chemicals in e-cigarettes are still capable of causing serious health complications like lung disease and heart disease. It took decades to gather the data to show how harmful traditional cigarettes are, and it will also take time to show the harmful effects of vaping.

“If you look at vaping, we have this early data suggesting there are health risks associated with e-cigarette use,” Onugha says. “Would I be surprised if in 20 years we showed that prolonged use of e-cigarettes can cause cancer? No, I wouldn’t be surprised at all.”

The U.S. Food and Drug Administration (FDA) does not currently require safety testing of all substances in e-cigarettes, says Jamie Garfield, MD, national spokesperson for the American Lung Association.

Studies demonstrating the long-term effects of vaping in humans are still emerging, but some animal studies have shown that e-cigarettes can cause the same level of harm as traditional cigarettes. It is important to note that results from animal studies cannot be extrapolated to humans.

For example, a 2019 animal study exposed mice to vapor from an e-cigarette for four months, about a quarter of a mouse’s lifespan. The mice did not develop complications typically associated with smoking, such as emphysema, but did develop lung damage, causing inflammation that reduced the effectiveness of the immune system.

Another 2019 study found that mice that were exposed to e-cigarettes for 54 weeks had an increased risk of lung cancer and also showed cancer-causing changes in bladder cells.

Important: Researchers are still unsure of the long-term risks of vaping in humans, but early data indicates that vaping can cause serious lung damage and other health complications, Onugha says. E-cigarettes may contain fewer chemicals than traditional cigarettes, but that doesn’t make them safer.

Vaping can help you quit smoking

Vaping is harmful, but some studies have shown it to be effective in helping people quit smoking regular cigarettes.

A 2019 study, partially funded by pharmaceutical companies Pfizer and Johnson and Johnson, found that people who used vaping to quit smoking had an 18% one-year quit rate, compared to around 10% in the group. nicotine replacement therapy.

However, while the subjects quit smoking regular cigarettes, 80% were still vaping a year later, while only 9% of people in the NRT group who had quit were still using NRT.

“E-cigarettes have been marketed as a way to help people wean or quit smoking,” Onugha says. “But essentially you’re trading one problem for another.”

While some smokers have successfully quit smoking and attribute it to vaping, e-cigarettes still contain nicotine, which is highly addictive, Garfield says. Some e-cigarette manufacturers claim that their products contain less nicotine than traditional cigarettes, but newer products are becoming more efficient at delivering nicotine to users.

How to quit smoking

“Quitting an addiction is very difficult, and nicotine addiction is no different,” says Garfield. “And a lot of times, you have to approach it in a multifaceted way.”

Is vaping bad for you?

While the long-term effects of vaping in humans are still unknown, it’s clear that vaping harms the lungs and can lead to serious health complications, Garfield says.

In August 2019, health officials across the country noticed an outbreak of serious lung infections in otherwise healthy people. The Centers for Disease Control (CDC) has named this condition E-Cigarette or Vaping Product Use-Associated Lung Injury or EVALI. Symptoms include:

More than 2,000 people have been hospitalized with EVALI in the United States and dozens have died, according to the CDC. Laboratory data show a strong link between

acetate, a common additive in electronic cigarettes, and the EVALI epidemic.

Important: Vitamin E is commonly found in many foods, such as vegetable oils, meats, and fruits, and is generally not harmful when ingested. However, when vitamin E is inhaled, it can interfere with the normal functioning of the lungs.

Some studies show that vaping can help people stop using regular cigarettes, but that doesn’t make it a safer alternative. The long-term health complications of vaping are still unknown, but preliminary data shows that it damages the lungs and could lead to serious infections.